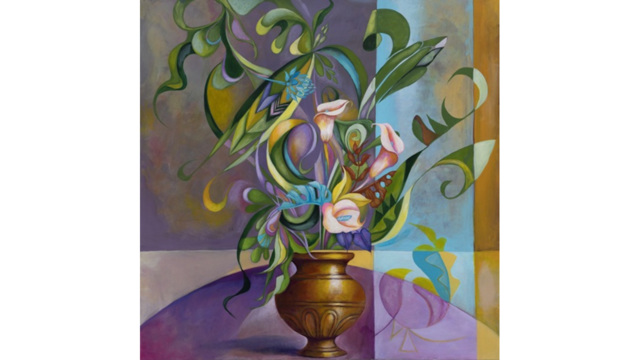 An exhibition and celebration of Cincinnati artist, Cedric Michael Cox. Featuring works from Cedric's 20-year career as an artist, as well as new works.

Cedric Michael Cox is best known for his paintings and drawings which fall between surrealism and representational abstraction. His work expresses themes ranging from mythical literature to the relationships between the physical body, musical allegories, natural, and man-made landscapes.

As a student at the University of Cincinnati’s College of Design, Architecture, Art, and Planning, Cox was awarded a fellowship to study at the Glasgow School of Art in Scotland. After receiving his BFA in Painting in 1999, he began to exhibit locally and regionally.Past solo exhibits include the Contemporary Arts Center, the Carnegie Visual and Performing Arts Center, and Weston Gallery in the Aronoff Center for the Arts.  In support of his efforts in the visual arts and art education communities, the City of Cincinnati awarded Cox the Individual Artist Grant in 2009.  He received a Congressional Award in 2010.His art has been featured in magazines, on television, and in the college textbook Drawing: Space, Form, and Expression.  In addition to his work being in corporate collections, Cox executed two large-scale public murals for the city of Cincinnati and murals in various Public Schools in the Cincinnati region. His recent exhibits include the Museum of Science and Industry Chicago, the Phoenix Gallery in Chicago, Sacramento’s Evolve the Gallery, the Harlem Fine Art Exhibition, the Williamsburg Arts and Historical Center Brooklyn, NY, the National Arts League, Douglaston, NY, and The Robeson Gallery at Pennsylvania State University.  In 2013, Cox returned to Chicago for the Black Creativity Exhibition at the Museum of Science and Industry and in July of 2013 Cox had his first solo exhibition in New York at Five Myles Gallery in Brooklyn.  In 2014, he returned to New York exhibiting his work at the Skylight Gallery, Arcilesi/Homberg Fine Art and later that year he had a retrospective of his work at Northern Kentucky University followed by an exhibition at Thomas More College in 2015.  The Dayton Art Institute awarded him the Yeck Artist In Residence in 2015 and in 2017, Cox had a solo exhibition at The Taft Museum of Art.  Pyramid Hills Sculpture Park and Museum held an exhibition of recent works in 2018 and this year he had his work exhibited at 21c Museum Hotel in Cincinnati. Cox currently has work showing at Gallery 708 and Gallery Guichard in Chicago.