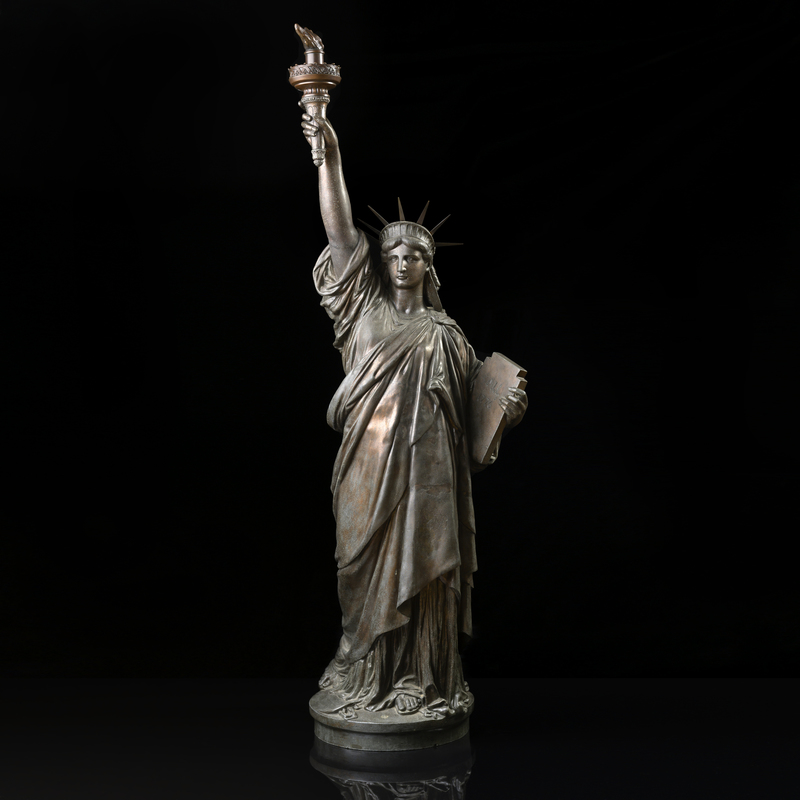 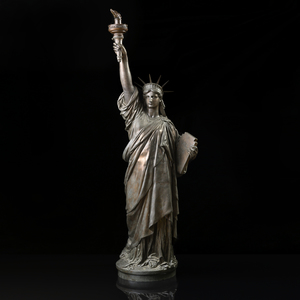 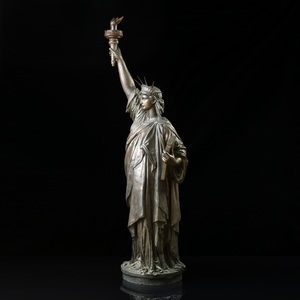 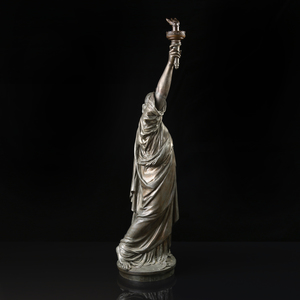 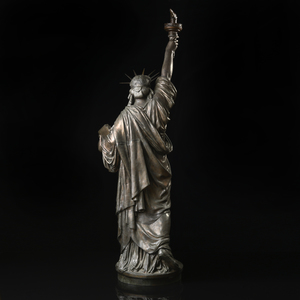 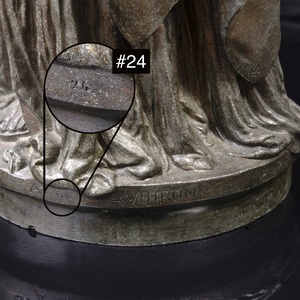 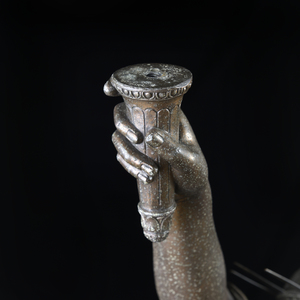 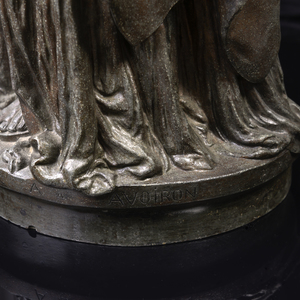 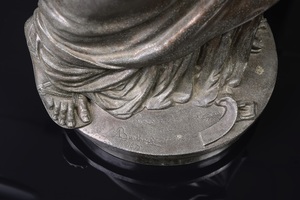 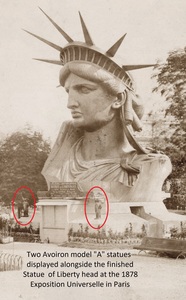 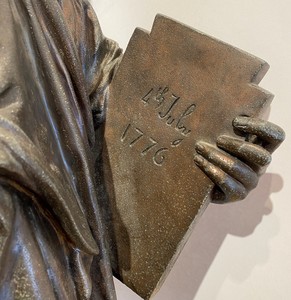 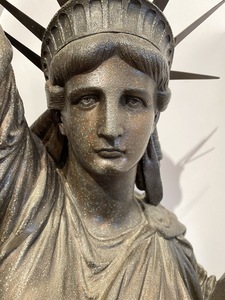 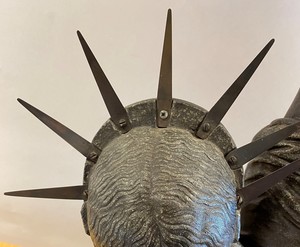 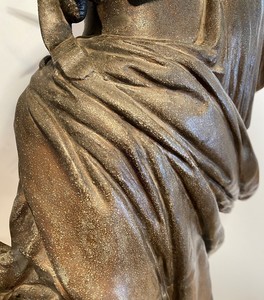 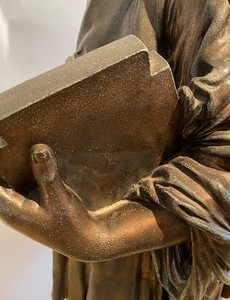 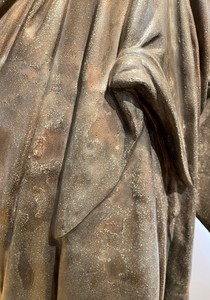 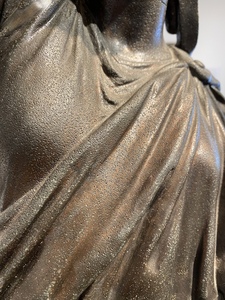 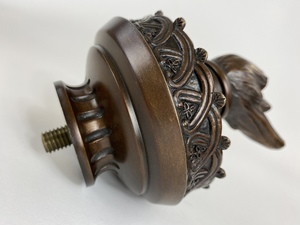 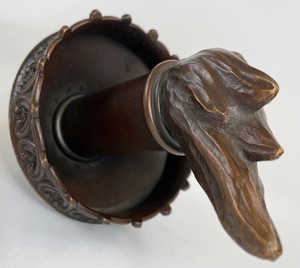 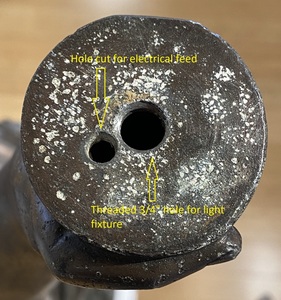 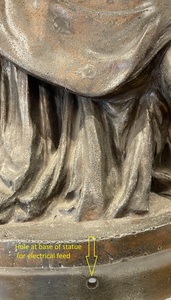 zinc sculpture with copper clad bronze patination
signed at base and dated 1875
inscribed at base: Registered in Washington, 31 Aout 1876, 9939-G
stamped to base's side A 24, and inscribed Avoiron Paris

Avoiron Foundry "A" Models of the Statue of Liberty

In his 1885 memoirs Bartholdi describes how the idea for the Statue of Liberty was conceived at a dinner party given by the French activist, Edouard-René Lefebre de Laboulaye in 1865.1  Laboulaye was an intellectual and an authority on the American Constitution.  "After 1776, America was often seen by the French as the realization of the political philosophy of the enlightenment, the embodiment of Liberty and Reason."2 Leboulaye wanted the statue to be a gift directly from the people of France to the people of the United States  not a gift of government  a true expression of commonality and friendship between the citizens of each nation. Initially the plan called for the statue to be presented at the United States Centennial in 1876, and Laboulaye became the principal fundraiser for the project.

At Laboulaye's urging Bartholdi journeyed to the United States in 1871 where he explored the country, solicited patronage for the statue, and chose Bedloe Island in New York harbor as the ideal site for his colossus.

During the preliminary planning stages Bartholdi made several terra cotta casts of the Liberty figure with varying characteristics - by 1875 he had "produced a model of Liberty which established the figure with basic attributes as it appears today.3"

In 1876 Bartholdi made a second trip to America in order to accompany the completed arm and torch of Liberty, due to be displayed in Philadelphia at the Centennial Exhibition. During this visit Bartholdi secured copyright 9939-G dated August 31, 1876 for a "Statue of American Independence" and deposited with the copyright office a photograph of his Liberty model4 and a drawing of how the statue would look in New York harbor5.

"By 1876Bartholdi recognized the possibilities of small-scale reproductions of the statue as a means of recompense, for the statue's construction was an enormous drain on his personal finances. The principal founder to whom Bartholdi turned was Avoiron, a specialist in 'imitation bronze'  zinc with surfaces treated to resemble bronze - and with whom Bartholdi had a contract which paid him ten percent on all models of Liberty cast and sold by the foundry. In four sizes, with most casts individually numbered, Avoiron's production met with considerable success and represents the largest known number of replicas made in France."6

The Avoiron A statues were modeled on Bartholdi's four foot modèle d?'étude, cast in zinc, and then electroplated in copper. Avoiron A casts of Liberty are distinctive in that examples bear Bartholdi?'s signature, the date 1875, the inscription "Registered in Washington, 31 Aout 1876," and the copyright number 9939-G. They are also cold-stamped on the circular base with the name of the foundry, Avoiron et Cie (or a variation), the letter "A" and a number. The Technical Examination Report/Proposal for Conservation Treatment by the Center for Archaeometry at Washington University confirms that the Avoiron model currently for sale at Caza Sikes does possess all of these distinctive A model features.7

At the 1878 Exposition Universelle in Paris there is a photograph of an Avoiron A model clearly displayed next to the now finished head of Liberty.8  It is worth noting that one of the inventions featured at the Paris Exposition was electric street lighting and Avoiron et Cie produced fixtures for electrical lighting.  "While in the smaller two of four sizes the foundry [Avoiron] cast Liberty with a flame as part of the cast, the two larger sizes usually feature, not a cast flame, but fittings for either gas or electrical illumination."9 These larger models sometimes featured an etched glass globe.

Bartholdi ended his contract with Avoiron et Cie in 1886, so Avoiron A models can be reliably dated from c. 1878 until 1886.

In 1986 Christie's New York held a special Centennial Exhibition, IMAGES OF LIBERTY, Models and Reductions of the Statue of Liberty 1867-1917, and published an accompanying catalogue with the same title. In this catalogue is a list of contemporaneously known examples of Avoiron A Liberty casts, including the current example being offered for sale, which is documented as residing in a Private Collection/Ohio. In the 1986 catalogue created by Christie's for the Centennial Exhibition there were only 7 known casts in the "A" size.10

Insurance documents, correspondence, conservation reports, and photos further document this Liberty as an Avoiron A model. In 1980 it was shipped to the National Gallery of Art for review, and was subsequently recommended for conservation treatment to the Center for Archaeometry at Washington University, St. Louis. It has been listed as one of the known examples at least since 1984.

An exceptional opportunity.  At the present time, this example is one of 8 extant models.

Extended arm was reattached by a conservator.  Casting replica of torch holder (from another example) reproduced by a conservator around 1980.  Original etched glass globe missing.  Surface has some repatination and was cleaned around 1980 (original conservation report present with lot).  Still remaining are areas of pitting, mostly visible to the naked eye.  Sculpture had periods of weathering- an expected wear given this exposure.

Have a Similar Item? 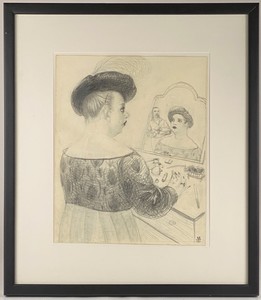 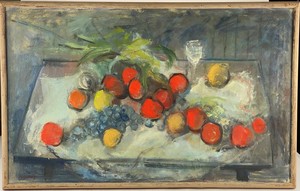 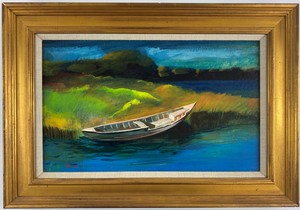 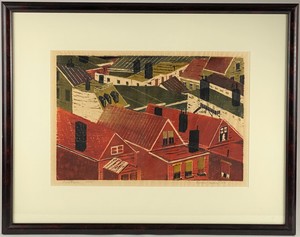